Red Vs Blue Go To Church

Today's offerings are a bit different from what I will normally be posting here.  These are NOT all that easy to assemble sets, one set, requires the character be a Priest that has access to T-1 drops and the other requires access to a tailor with some Burning Crusade era recipes; that bring about bittersweet memories of crafting epic gear during the "good ol days" and how much farming that entailed :P .

Note: While this will continue to be a female dwarf centric fashion blog, I will on occasion use other models I feel compliment some sets in a particular way.  This is the case today as the lovely Sin'dorei, Setanis Arkandil, is our guest model courtesy of the Verdant Circle Modeling Agency™, who models our first set.

This set, while capable of looking quite fetching on a variety of races and genders (As seen Here thanks to engineering malfunctions) to me just seems very appropriate for Blood Elven characters with it's rich scarlet, gold, and black accents. 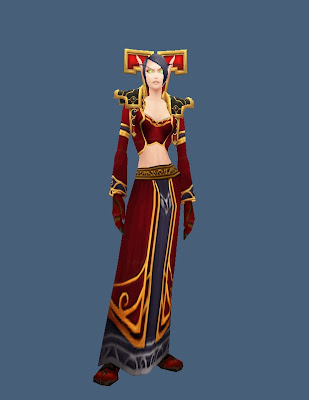 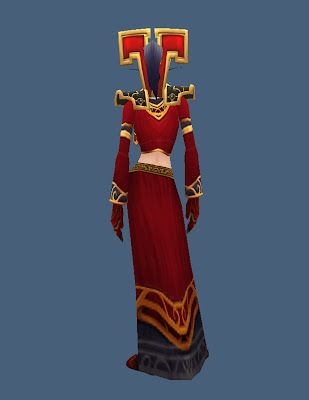 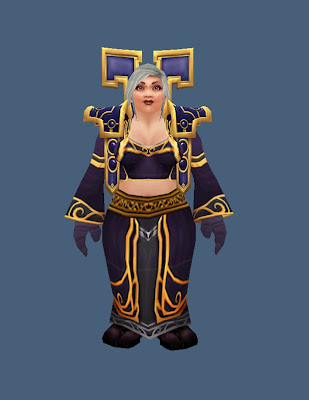 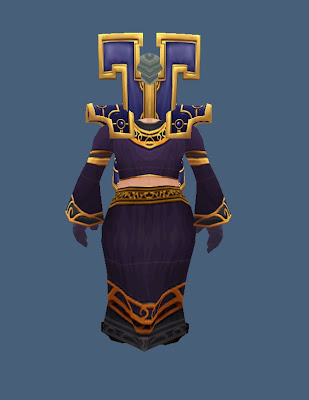 Today I am showcasing 2 sets from Eddara of Wyrmrest Accord.  These are mail and plate centric sets that keep nicely to a theme. 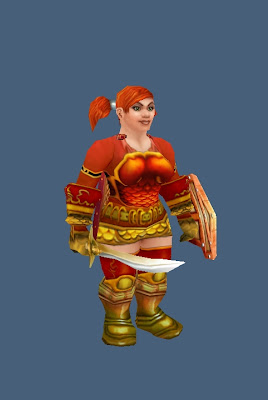 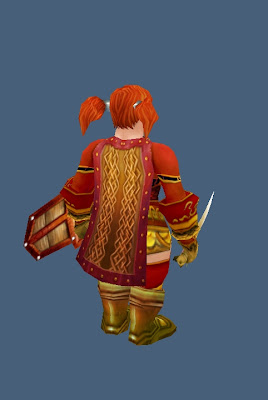 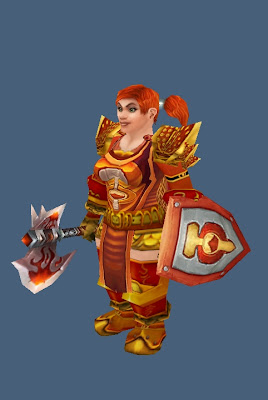 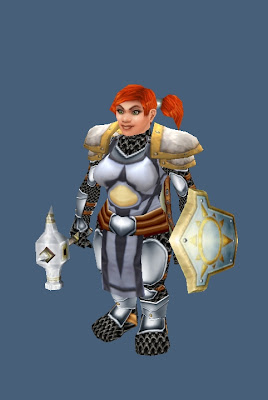 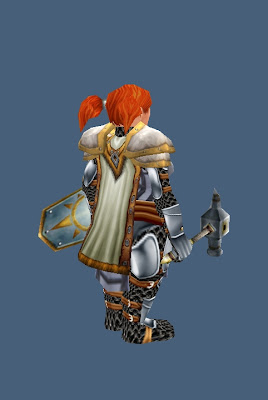 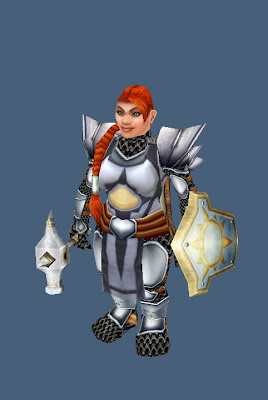 So You Want to be a Necromancer...

Today's set is contributed by Emmberr of Wyrmrest Accord. This is a fetching Necromanceresque  set (could easily be used for cultist RP as well) that in its original incarnation is a Death Knight only variation as it makes use of the excellent looking Acherus Knight's Hood (we need more awesome looking cowl type hats Blizzard!).  However, other items can be swapped in that keep with the original look and feel of the costume. 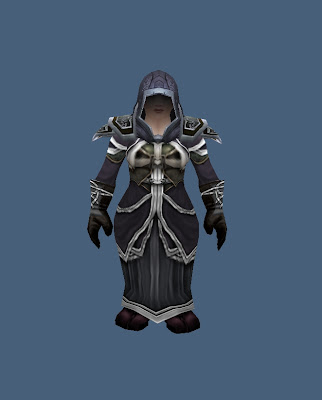 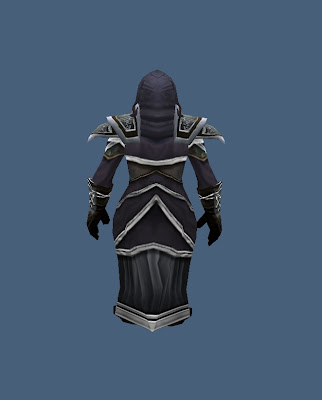 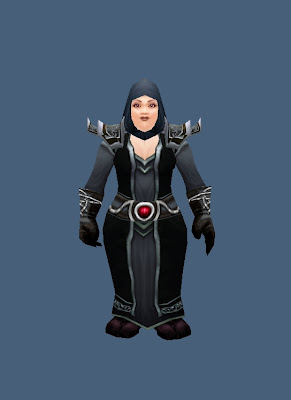 The gloves, shirt, and boots are kept the same as the orignal set.

There are a variety of weapons and offhand combinations that work with this costume idea, from scythe style weapons such as the War Scythe or the Frostscythe of Lord Ahune to the more subtle combinations of a dagger (bonus points if one of the enchants with the dripping blood effect is applied ;) ) and a tome for the off hand.  It's a fun set for those of darker intent...
Posted by FashionDwarf at 5:45 PM No comments:

No not epics, but the beautiful hues of a dark purple set that thematically matches that of the last two entries.   There are also lots of mixing and matching that can be done with this theme with various other items which is neccessary as this is also a somewhat incomplete set lacking exact matches for the gloves, shoulder and shoe slots. The complete set is represented in game in several incarnations, namely the sneaky Blood Elf Bandit who wanders around Azuremyst Isle, but is unavailable to players as a complete set (and what I would do for a purple and gold version of the Blood Elf Bandit Mask! ). 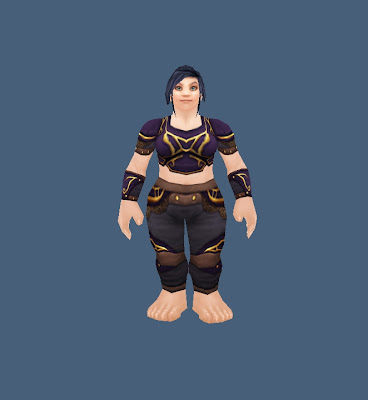 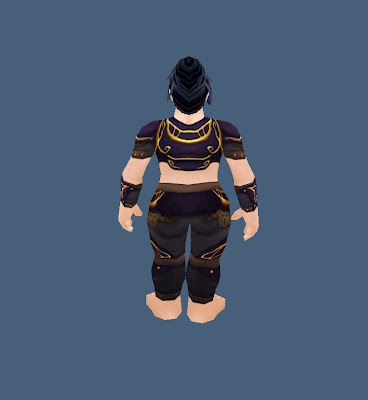 
Bracers
Blackstrike Bracers: Tailoring, BOE (might be rather rare depending on your server)


Semi-sets that Complement this set nicely. 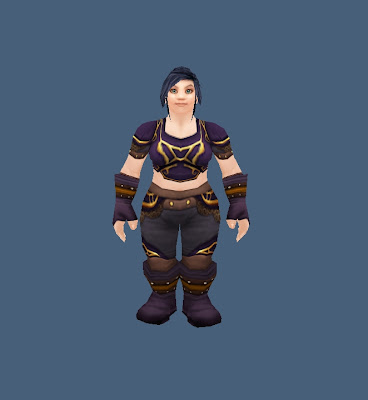 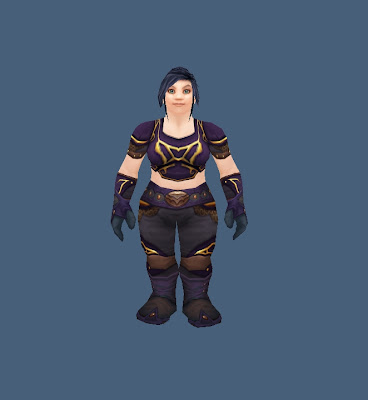 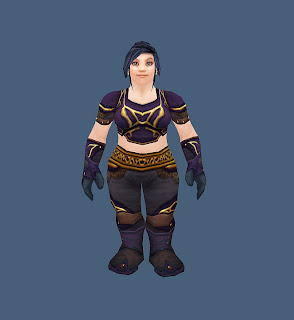 The next post will highlight several user suggested outfits.
Posted by FashionDwarf at 2:03 AM 2 comments:

This set is similar to the last one posted, but is the red version.  Sadly this set is significantly harder to attain, with the chest, gloves and pants for the primary variant requiring access to a tailor and a leatherworker.   It is however a visually striking set and in my opinion, well worth the trouble to obtain. 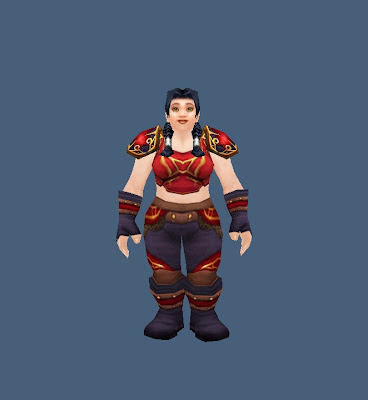 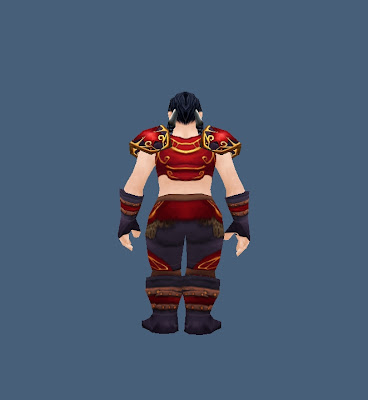 
An alternate look is to use Blacksting Gloves, a quest reward from Zangarmarsh (thanks to Kamaliaetalia for pointing out that these were not only Alliance side rewards!) . 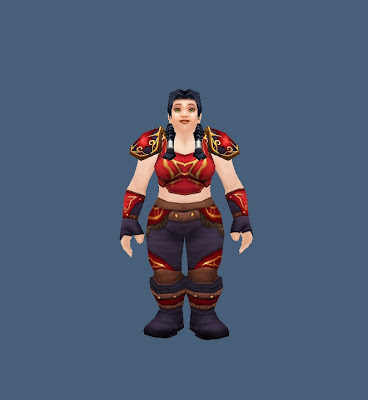 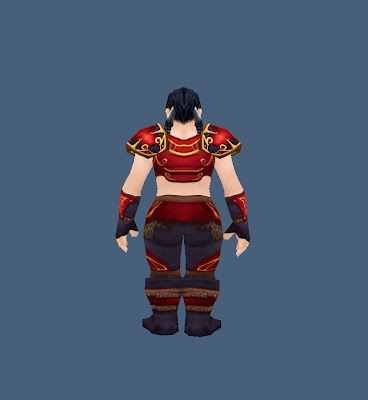 The first of Three Distinctive Outfits from the Great Beyond

First off, an apology to my readers for a long lack of updates.  Real Life, new (well recycled) game content, and other factors have served to distract.

Today's post brings us to Outland.  A place that to many of us arguably brings to mind OP Boars that owned many of us during our first forrays into Hellfire Peninsula, endless Kara runs, and suits of outlandishly mismatched of armor that easily classified as clown suits.  However, buried amidst the crafted, reputation obtained, rare mob drops, and quest reward gear of the ruins of Draenor are some delightfully beautiful clothes.  The sets presented here appear to belong to the Blood Elven school of aesthetics, though, to me are not quite as brightly colored as some Blood Elven clothing ;)

One of my goals here is to promote easily obtainable set for the casual, average player to obtain in which to look good with.  The three sets that will make up this cycle of posts are a partial exception to that rule.  Most of these items are quest rewards many aqcuired early in Outlands questing chains and for most level capped characters may not be obtainable.  Some of the following sets will also include some crafted gear that is BOE or just plain bloody rare.  However, I think these sets are just too pretty to not expose to a greater audience.

The first complete set is mostly a leather set that is easily obtained by Alliance characters starting their Outland experience, but takes a little more work for Horde characters to obtain (but not impossible). 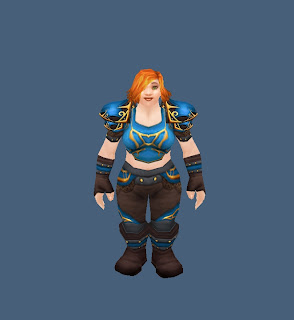 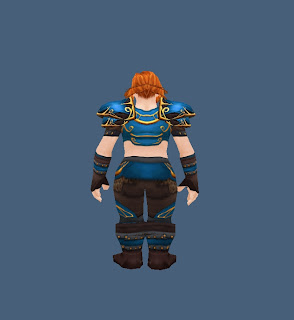 
An alternate look is to use a one of the many hand length black gloves (cloth and leather mostly) and to keep the bracers exposed. For this particular screen I used Royal Gloves a level 39 BOE Green drop. 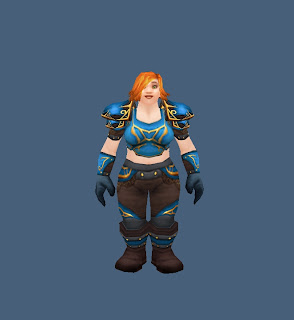 Posted by FashionDwarf at 2:38 PM No comments:

So You Want To Be a Super Villain?

Today marks the first reader submitted RP costume for Fashion Dwarf.  Dascylus, a Worgen Death Knight from Argent Dawn, likes to masquerade as Lord Victor Nefarius!  Now this set has a few requirements to properly pull off.  First off, one has to roll either a Human or Worgen male, Death Knight . Secondly, you must be in a position to get some Tier 11 gear.  There are some BOE Trash drops that match some of the DK tier pieces, but sadly at this time, there are no BOE or non-DK pieces that match the hand slot items.

Disclaimer. I bear no responsibility whatsoever should one very cranky, very powerful black dragon; corpse camp you for infringing upon his style (The Black Dragonflight does not strike me as the sort of organization that appreciates flattery through imitation...) 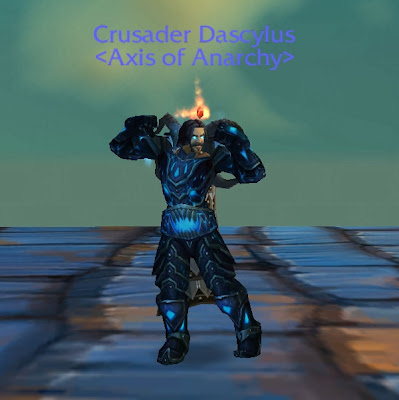 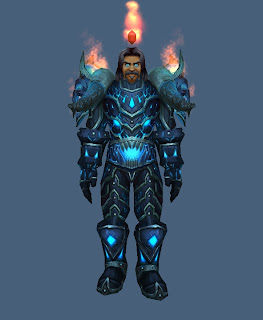